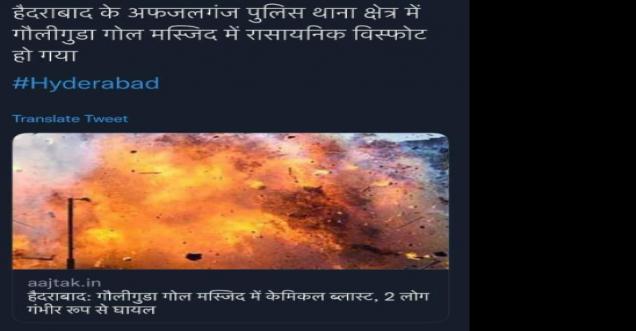 News Claim: 'Hyderabad: Chemical bomb in Gauliguda Gol Masjid, 2 critically injured,' says a snapshot of Aaj Tak news channel's tweet on social media, in which the photo of the blast reads. This screenshot has received a lot of attention on social media.On Facebook, a user Bajrang Lal Saini Guru posted a screenshot of Aaj Tak's tweet and wrote, 'What is the use of chemicals in the mosque? Why was so much chemical collected that it would explode? What kind of chemical was there that would explode?'

Apart from Aaj Tak, many media portals also covered this news stating the blast in the mosque, including portals like OpIndia, liveupnews24, inkhabar. However, Aaj Tak later updated the news.

News Verification: Using comparable keywords on the internet, Ayupp fact check team discovered stories from Jansatta and etvbharat on June 12, stating that the incident occurred in Hyderabad's Afzalganj neighbourhood. "On Sunday morning, a chemical explosion occurred in Hyderabad's Afzalganj neighbourhood. On Sunday, a boy was killed and his father was injured in a bomb in the Maharajganj region of Afzalganj "According to Jansatta's report.There is no mention of a mosque anywhere in both the report.

News verdict: We found out that the blast did not take place in any mosque.