A picture of a broken dome is circulated on social media with the claim that the dome Jama Masjid got damaged due to the strong storm. 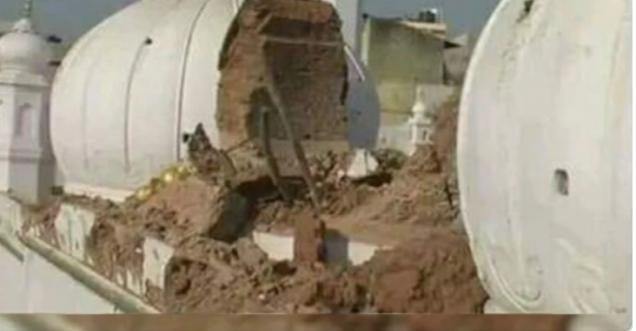 News Claim: Due to torrential rain and hailstorm on May 30, Delhi was able to escape the sweltering heat, but it came at a cost. The storm caused significant damage to Delhi's iconic Jama Masjid. The brass metal urns on top of the main dome were damaged in this incident. The news of the damage done to the Jama Masjid is now making the rounds on social media. In which it is stated that the strong storm has caused half of the dome to collapse.

A picture of a broken dome was quickly circulated on social media with the claim that it shows the dome of the damaged Jama Masjid. With this viral picture, users are writing on social media that, "The 300 kg dome and urn of Jama Masjid falling in the storm yesterday is no coincidence. This is a clear indication of Mahadev, for him as well as for us.

News Verification: The picture that went viral was analysed by Ayupp.com's Fact Check team. The viral allegation was shown to be false throughout our examination. During our inquiry, we discovered that the picture that has gone viral is not from Delhi. It was taken in Uttar Pradesh in 2017. We uncovered multiple media reports from October 2017 with the identical image when we reverse-searched the viral image. This photograph is of a historic Jama Masjid in Uparkot, Bulandshahr, Uttar Pradesh, according to a magazine piece dated October 21, 2017.

It has been reported in the news that one of the three domes of the mosque had collapsed during the afternoon prayers on 21 October 2017. Three children and a dozen adults were injured. A child had died on the way to the hospital. A video report about the incident was published by News18 on October 24, 2017. The picture of the mosque seen in that video and the mosque getting virus is the same. It is clear from this that the claim being made with the picture to be viral is false.

News Verdict: The Fact Check team of Ayupp has investigated the picture going viral. In our investigation, the viral claim has been proved to be fake.