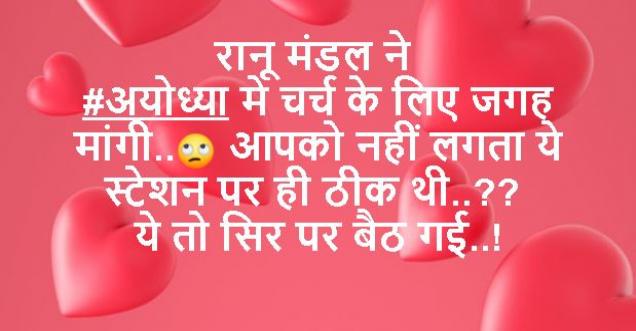 Did Ranu Mondal Demand for a Church Land in Ayodhya ?

Social media is flooded with messages that new singing sensation Ranu Mondal has demanded for a lot in the Ayodhya, in order to build a church

Fake news claim: Multiple messages are shared on various social media groups claiming the new India singing sensation demanded a piece of land in the Ayodhya, for the creation of Church.

Supreme Court of India gave a historic judgment on the Ayodhya dispute. Of both the parties – Hindus and Muslims – some welcomed the verdict and some are not satisfied. While all this, another major community of India i.e. Christians, felt left out.

Therefore, some Christian organizations came together and requested the new prominent figure among Christians, Ranu Mondal, to speak on their behalf. Ranu Mondal decided to file a claim demanding some land in Ayodhya to be dedicated for Christians as well so that they can build a grand Church. She said that this will be a display of true secularism of India if Supreme Court allots some land to Christians. I will also request Sidhhu ji to come forward and demand some land for Gurudwara.

The Fauxy tried to speak with Ranu but she said she has no time as she wanted to practice singing. We heard her calling her personal assistant saying, “aaaaaa aaaaaa”.

Supreme Court of India gave a historic judgement on Ayodhya dispute. Of both the parties - Hindus and Muslims - some welcomed the verdict and some are not satisfied. While all this, another major comm | India's Finest, Fastest & Fictitious News Source

News Verification: All the messages being circulated on Social media regarding Ranu Mondal, regarding demand to build a church in the Ayodhya is Fake.

It originated from a satire website, the news was published on website fauxy . The disclaimer of the website states that “The Fauxy is a Satire Web Portal. The content of this website is a work of fiction. Readers are advised not to confuse the articles of The Fauxy as genuine and true.”