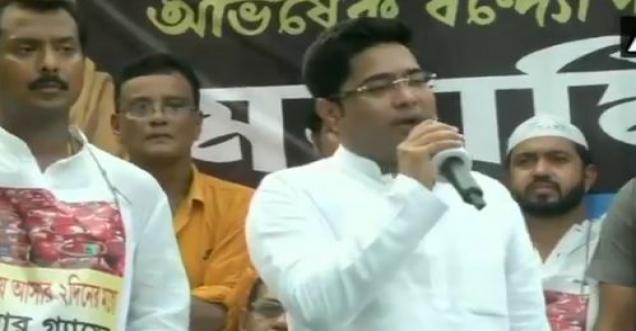 Viral Claim: A video viral of Abhishek Banerjee of a student slapping him while speaking at a rally is not new.

Facts Check News: Recently a video went viral of Mamata Banerjee’s nephew Abhishek Banerjee who was slapped during a rally.

The video is from 2015, an incident where Abhishek Banerjee was slapped by a engineering student while speaking at a rally in east Midnapore district.

As reported in telegraphindia, The youth who slapped Mamata Banerjee’s nephew has been identified as Debashis Acharya, 25, a third-year BTech student of an engineering college in Durgapur.

In Jan 05, 2015. West Bengal Chief Minister Mamata Banerjee’s nephew and president of Trinamool Congress’s youth wing Abhishek Banerjee was slapped by a youth at a rally at Chandipur in East Midnapore district on Sunday.

The youth, wearing a cap, mounted the stage from where Banerjee, an MP, was addressing the gathering. On the pretext of clicking photos on his cellphone, the man suddenly lunged towards Banerjee and slapped him, catching him off-guard, police officials said.

According to a NDTV report, the man has been identified as Debasish Acharya. He is a 25-year-old engineering student at a college in Durgapur.  Kolkata police have said that the youth has RSS affiliations, reported CNN-IBN.

Recently Mamata Banerjee’s nephew compares chants for Ram, Kali to TRPs, he said “People told me that Dilip Ghosh has asked to raise slogans of Jai Ma Kaali along with Jai Sri Ram. I told them, Mamata Banerjee was there so that is why suddenly Ram’s TRP has gone down and Ma Kaali’s TRP is going up.”

#WATCH Kolkata: TMC leader Abhishek Banerjee says, "People told me that Dilip Ghosh has asked to raise slogans of Jai Ma Kaali along with Jai Sri Ram. I told them, Mamata Banerjee was there so that is why suddenly Ram's TRP has gone down and Ma Kaali's TRP is going up." (04.6.18) pic.twitter.com/2wXkMMIsOK