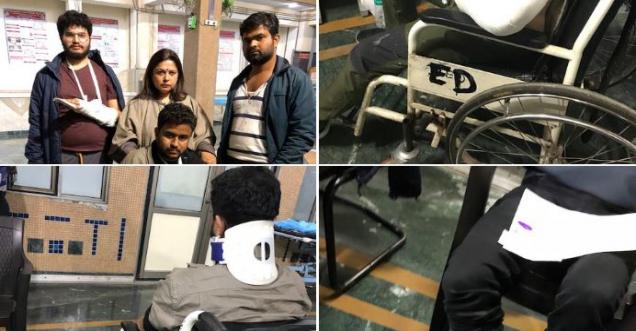 India: Newslaundry has published news related to the JNU incident, claiming the JNU ABVP students just got some superficial injuries, comparing them to the injuries to the leftist supported students of receiving serious injuries in nature. The article published on newslaundry is based on the comments by a doctor by the name of Dr. Harjit Singh Bhatti. Barkha Dutt and many others quoted Dr. Harjit Singh Bhatti in their tweets and posts.

In first official word on the injuries in #JNU mob attack @DrHarjitBhatti tells #Mojo that 23 people are admitted with injuries at the Trauma Centre, students, but also teachers. Most injuries from blunt & sharp objects both, & 2 have lacerations. Watch: https://t.co/9PPU9l33L4

Barkha Dutt, in the above tweet, tried to make the tweet look like an official tweet from AIMS by stating it as official, however, the AIIMS has never made any official statement on the JNU and AVBP members. Dr. Harjit Singh Bhatti doesn't represent as an official member of AIIMS.

What you see is not what is. Reality lost in propaganda. Falsity found in pictures.ABVP students were lynched by Cong-Left combine when seeking registration of next semester. Let’s call out this selective bigotry and outrage.