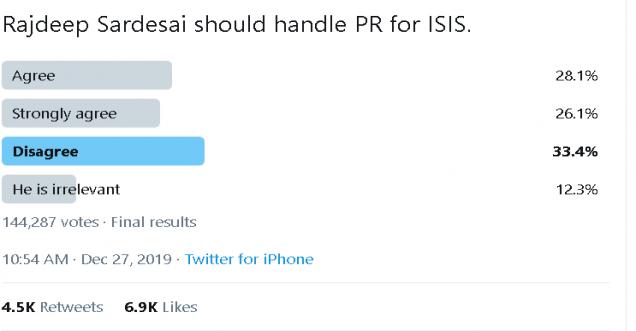 The Editors Guild of India today came in strong support of the Controversial Journalist Rajdeep Sardesai and issued a statement condemning the Twitter poll ran by BJP IT cell head, Amit Malviya in which he had asked his followers to vote on whether  Rajdeep Sardesai should handle the PR for the terror organization Islamic State, ISIS.

Editors Guild of India, Premier, non-partisan association of editorial leaders in India. Committed to free, fair and independent journalism. Not a watchdog, but a conscience keeper. The Editors Guild of India was established in 1977, soon after the Emergency, with the objectives of upholding the freedom of the Press.

The guild has failed overtimes to taking a right stand against the journalist who was biased. It issued a statement calling the poll on Twitter as tasteless

The Editors Guild of India has issued a statement pic.twitter.com/dFrGYuTYJq

The Guild also called into question “the BJP’s commitment to a healthy debate and dissent without allowing disagreement to degenerate into abuse. It asked Mr. Malviya to urgently withdraw the Twitter poll while asking the BJP to “caution him strongly”.

Amit Malviya had earlier floated a Twitter poll, seeking answers from his Twitter followers on whether controversial journalist Rajdeep Sardesai should preside over the PR for the terror outfit ISIS.

When one sees imaginary tricolors and pictures of Mahatma in protests cheered and led by Islamist slogans, leading to violence, destruction of public property & Temples, then they must be called out for their bigotry.

Are these people willfully blind or have their PR glasses on? https://t.co/zJswVjpJBE pic.twitter.com/TnEs2QpMVv

The poll saw participation from 144,287 Twitter users, The poll ended on Saturday, about 33 percent voted ‘disagree’ while 26 percent and 28 percent of the people voted for agreeing and strongly agree respectively. 13 percent of the users voted for he is irrelevant’.

While a harmless Twitter poll should not have warranted a response from the Editors Guild of India, but The Guild not only issued a strongly-worded letter of condemnation but it also asked the BJP to “strongly caution” Malviya to remove the poll.

As a Twitter user, Malviya is well-within his rights to run a Twitter poll no matter how unpleasant or disagreeable it is for certain sections of the society or any person. Instead of reprimanding and moral policing Malviya, the Editors Guild of India should have exhibited tolerance towards his right to Freedom of Expression.

The response from the Guild, in this case, is in sharp contradiction to its reticence to call out journalists like Ravish Kumar for their contemptuous remarks against fellow journalists. While Amit Malviya’s Twitter poll allegedly slandering Rajdeep Sardesai is denounced, the Editors Guild of India gives a free pass to the repeated derogatory jibes of “Godi Media” made by Ravish Kumar against journalists who do not conform with his worldview. The Editors Guild of India has so far not issued a single statement decrying Ravish Kumar for his snide remarks against other fellow journalists from the same fraternity.

The partisanship of the Editors Guild of India is evident when it goes hammer and tongs against an Individual for floating a harmless Twitter poll while keeping mum on serious offenses like physical attacks against journalists and state-sponsored violence.

Moreover, one can also judge the credibility of the Editors Guild of India when its President, Shekhar Gupta, himself peddles lies and provides a platform for others- The Print, to lie promiscuously.