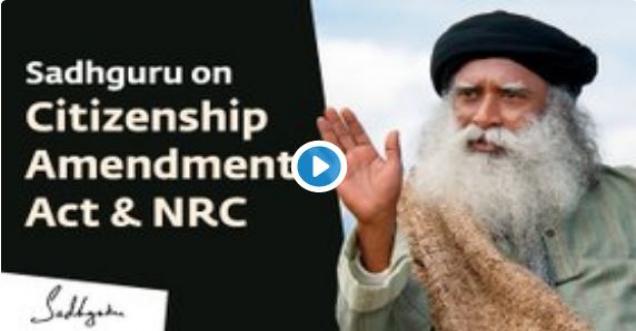 Prime Minister Narendra Modi has shared a video of famous spiritual guru Sadguru Jaggi Vasudev on Twitter. In which he is seen speaking on NRC and CAA.

New Delhi: A video of famous spiritual guru Sadguru Jaggi Vasudev is getting viral on social media these days in which he is expressing his views on the Citizenship Amendment Bill (CAA) and the National Citizenship Register (NRC). This video recently became even more discussed when Prime Minister Narendra Modi shared it on his Twitter account.

In the video, Sadhguru Jaggi Vasudev says that the Citizenship Amendment Act is a small step taken at a very late stage. In the video, Sadhguru says, 'Initially, when I was watching the protests across the country, this thought was coming to my mind again and again, is there any aspect related to this act that I don't know because the way people The incidents that were causing violence during the protest were shocking.

He further said that some people are playing very dangerous games. A straightforward act was misrepresented and tried to incite violence.

You can watch this video above in Hindi and in English with the tweet of Prime Minister Narendra Modi.

Do hear this lucid explanation of aspects relating to CAA and more by @SadhguruJV.

He provides historical context, brilliantly highlights our culture of brotherhood. He also calls out the misinformation by vested interest groups. #IndiaSupportsCAA https://t.co/97CW4EQZ7Z

Sharing the video of Sadguru Jaggi Vasudev, the Prime Minister wrote, 'Hear this clear explanation of aspects related to CAA from Sadguru. He is telling us the historical context and has brilliantly highlighted our culture of brotherhood. He also havetalked about spreading misinformation on behalf of some groups for their selfishness.