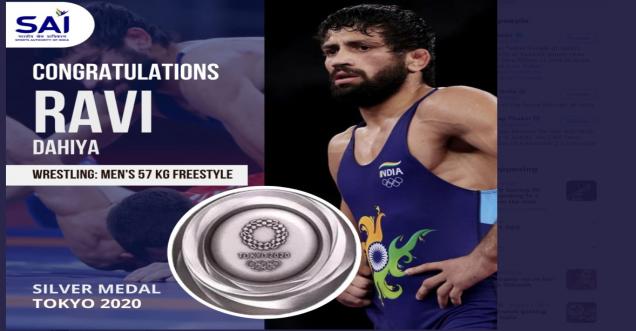 Good news has come for India in the 57kg category of wrestling. In Tokyo Olympics 2020, Indian wrestler Ravi Kumar Dahiya has created history by winning the silver medal in the final match. In the final match, Ravi gave a tough fight to the Russian wrestler however he could not win this match. With this medal, the Indian team has won five medals in the Tokyo Olympics.

Ravi Kumar was up against Russian wrestler Javur Ugaev in the finals. In this match, Javur defeated Ravi by 4-7. Ravi showed a strong fight in this match but he could not beat the two-time world champion Javur. Ravi fought till the last minute of the match but his luck did not favour him in the finals.

In the final match, the defence of the Russian wrestler was so strong that two-time Asian Games champion Ravi could not take points from him even after several attempts.

How the competition turned out:

Talking about the match, the match happened exactly as a strong final fans want to see. From the opening minutes of the match till the end, both the wrestlers were seen playing aggressive wrestling. The start was not good for Ravi Kumar. The Russian wrestler took his first point in the first 15 seconds of the match by pushing Ravi Kumar out of the mat from the standing position. A few seconds later, Javur did the same thing again and went 2-0 up in the match. After this, Ravi Kumar made a comeback and took the Russian wrestler and took the point and levelled the match.

But even after Ravi's return, the Russian wrestler did not stop. Javur placed Ravi's move on Ravi himself and again went ahead in the match. Javur was leading in the match 4-2 after the first round of three minutes.

🇮🇳 wrestler Ravi Dahiya will play for #Gold at #Tokyo2020 in some time, get ready to cheer for him.

In the second round, Javur once again pushed Ravi out to win another point. After that, he caught Ravi from behind and dropped him on the mat and took 2 points. They went 7-2 ahead in the match. Ravi was constantly trying to place bets but the defence of the Russian wrestler was very good. As the time was decreasing, Ravi's trouble was increasing. At the end of the match, Ravi once again took two points through a takedown. But after that Javur Ugaev of Russia did not allow him to score any more points and won the match 7-4.