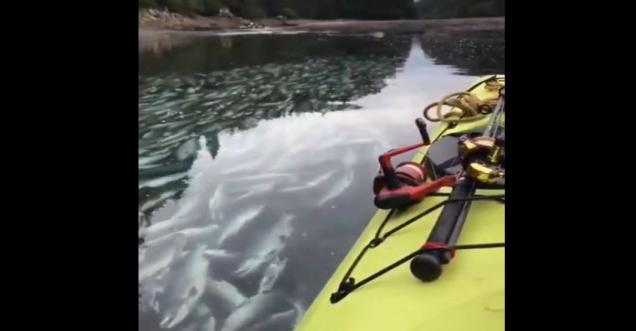 Brief Outline: A video viral on social media claiming in alaska. the water was too warm for the salmon and thousands of dead fishes can be seen floating in the water.

alaska. the water was too warm for the salmon

alaska. the water was too warm for the salmon:pic.twitter.com/F108eyEb14

Facts Check Analysis: The video might not be true as stated in the video, other explanation have come up ever since that this was an accident when the fishes were indeed released from a net and died during the release. Global temperature rise is a concern for many and all, however here it is not the case. Explained in the below post on Social media.  Explanation of COOK INLET ASSOCIATION:
Many of you have seen a video showing dead pink salmon in Tutka Bay posted by My Way Alaska on August 10, 2019. We want to take this opportunity to explain what you are viewing. To cover operational costs for the hatchery programs, CIAA develops cost recovery harvest plans for areas where hatchery raised fish will be returning, including Tutka Bay Lagoon in Kachemak Bay. Through a public bidding process, CIAA licenses the cost recovery operation to processors, who in turn contract for the catcher vessel (a seiner) to harvest the fish. Once the fish are harvested, they are taken straight to the processor. These fish are not used for hatchery broodstock. On June July 28, the cost recovery seiner was fishing in Tutka Bay Lagoon. It had a purse seine full of pink salmon when the bottom of the net snagged on something and ripped. Unfortunately, the fish were released and a number of them died in the process. We estimate that approximately 700–1,200 fish were lost. Accidents like this do sometimes happen to commercial fishing vessels, and we are sorry for any confusion it has caused. Please share.

MYWAY ALASKA comment:
Thank you very much to Cook Inlet Association for explanation. We've asked many people and organization here in Alaska without acceptable explanation. Finally, we know what happened in Tutka Lagoon. The date is correct, we recorded this video on July 28th in the evening.
But we think it's important to say, the situation was more serious than mentioned - there were much more death salmon in the water, maybe few thousand - all the way from the Tutka Lagoon to the Tutka Bay. It was like from Scary Movie. This is only 15 seconds video...