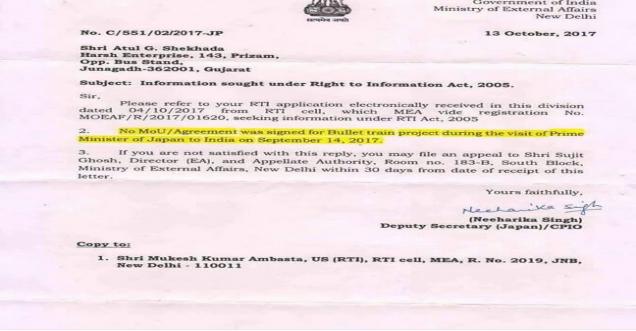 Modi Govt didn't sign any MoU for Bullet Train with Japan, reveals an RTI. See, I told you, PM was never serious about Bullet Train, it was all just for the show-off !!

Fact Check by Ayupp– Fake information being spread, the MOU was signed in 2015

See, I told you, PM was never serious about Bullet Train, it was all just for the show-off !! pic.twitter.com/jXuKXy2T9c

Is it true ? RTI reply says, no MoU or Agreement with Japan on Bullet Train . PM Modi can do anything to win Gujarat ? pic.twitter.com/Zmm0KxRu6o

Viral Message Verification – Fake message being spread on twitter and other social media. Actually the MOU was signed two year before the date as claimed of no MoU signed. Going by the PIB report on the link.

India and Japan have signed an MoU on 12th December, 2015 on cooperation and assistance in the Mumbai – Ahmedabad High Speed Rail Project (referred by many as Bullet Train project). The two countries have also entered into two comprehensive technological cooperation agreements on 11th December 2015, for modernization and upgradation of Indian Railways.

These agreements have been signed during the official visit to India of His Excellency Mr. Shinzo Abe, the Prime Minister of Japan, during December 11 – 13, 2015.

India and Japan have signed an MoU on 12th December, 2015 on cooperation and assistance in the Mumbai – Ahmedabad High Speed Rail Project (referred by many as Bullet Train project). Japan has offered an assistance of over Rs.79,000 crore for the project. The loan is for a period of 50 years with a moratorium of 15 years, at an interest rate of 0.1 per cent. The project is a 508 Kilometer railway line costing a total of Rs. 97,636 crore, to be implemented in a period of seven years. It has been agreed that Shinkansen Technology will be adopted for the project.  The cooperation of Japan will be fixed on transfer of technology and “Make in India”. Japan will assist India in training of personnel for HSR.

2)      Memorandum of Cooperation (MoC) between Ministry of Railways and MLIT, Japan on technological cooperation

(b) Rolling stock including train sets/EMUs;

(i) Mitigation of natural disasters;and

(j) Any other areas jointly determined by both Sides within the scope of this MoC.

The main directions of cooperation between the Parties shall be the development of rail-related technical cooperation in which the Parties may have mutual interest, performance of consultation and other services,

The broad areas of technical cooperation may include:

Specific projects under the above cooperation areas and modalities of cooperation will be jointly discussed and decided by the parties.

The comprehensive technological cooperation as envisaged in the above Memorandums are the result of the above discussions and follow-up. 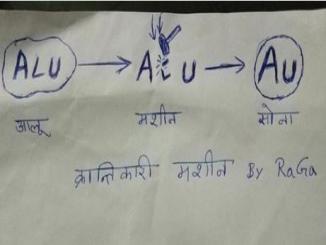