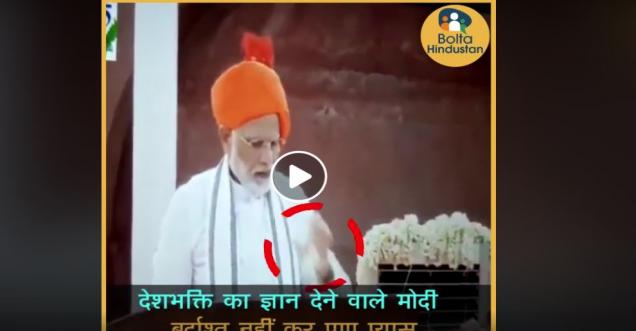 A Facebook page, Hindustan, has shared this video. There are more than 6 lakh views on this video and so far more than 38 thousand shares have been done. This video also has a watermark of Hindustan which is uploaded by many other Facebook accounts. The same video has been uploaded from Amethi-Raebareli's name page, which has more than 3,100 shares.

What is the truth of the video?

The video uploaded by Hindustan is edited. This video is different from original video. Actually, PM Modi delivered 1 hour 22 minutes speech on 15th August. After finishing this speech, he took the glass and started drinking water. It is natural to drink water after a long speech. Taking the glass of their water and the national anthem are almost simultaneously. But as soon as he heard the national anthem in the video, Modi can be seen farstly drinking water and removing glass.