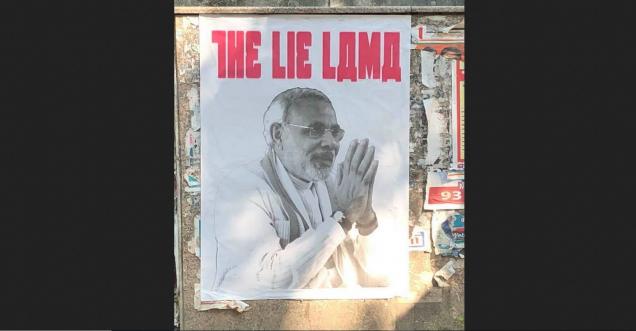 Brief Outline: The highest honour ever received by the leader of a country. UNESCO has confirmed. Posters calling Modi “The Lie Lama” spring in parts of New Delhi.

Viral Example: The highest honour ever received by the leader of a country.

[Posters calling Modi “The Lie Lama” spring in parts of New Delhi. According to the official police report, the posters carried no name or mention of the press where they were printed.]

Do you know the Dalai Lama? Lama is called a Buddhist cleric. Dalai Lama is the exiled spiritual leader of Tibet, who has found refuge in India. Some people believe that our Prime Minister Narendra Modi is also the Dalai Lama. Just a little bit change in the spellings. These 'unknown' people have posted some posters in city of New Delhi, where the picture of Hand folded Modi can be seen. Written on it as The LIE LAMA, It’s Hindi meaning is the liar. Basically, these people are saying that Narendra Modi is a liar. Especially during election campaign in karnataka.

The Delhi police are searching for these posters and put a complaint against these unknown people.  O doubt there is a political message behind this pictures.