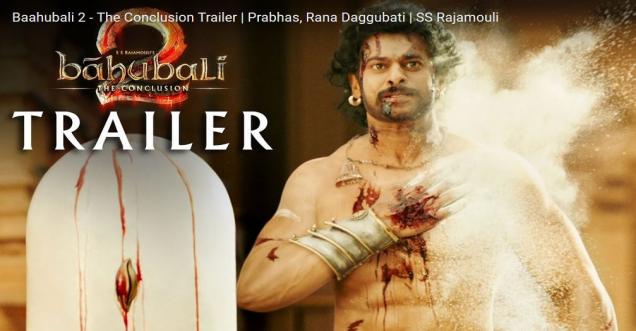 Baahubali 2Trailer: The Much hyped and the most anticipated Indian movie trailer is out. The movie trailer has been well accepted by all the fans who has watched the first movie and by all the critics of the movie industry.

There movie is like a once in a lifetime events, like the release of SS Rajamouli's sequel Baahubali 2: The Conclusion.

On sheer magnitude, scale and expectations, the film ranks right up there with the cricket World Cup. It is something worth waiting and yet impossible not to yearn for.

The film's trailer, released on Thursday, shows why Baahubali inspires both love and action. It resembles an epic and is larger than life.

There is no doubt in the success of Baahubali 2: The Conclusion is guaranteed. The Rs 200-crore revenge drama set in an a kingdom has already earned Rs 500-crore before its release through satellite and digital rights.

The next question would be to answered after its theatrical release — apart from why Katappa killed Mahendra Baahubali and if it lives up to expectations, compares with the first part and leads to similar hysteria at the box-office and is it really  worth the wait.