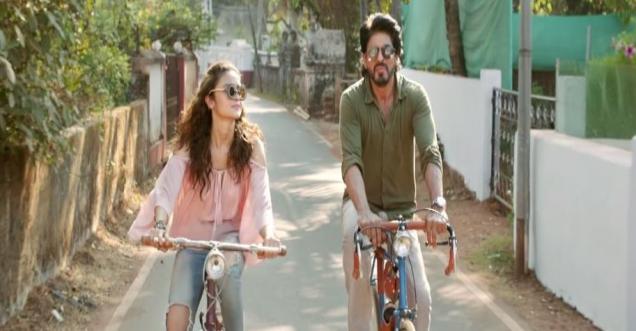 Looks like the makers of this movie are going to be showing only teaser, full trailer yet to be awaited

The teaser begins with the voiceover of Shah Rukh Khan and Bhatt’s character displaying diverse range of emotions. The inhibitions have stayed with her and crippled her ability to love freely.

We've always been encouraged to maintain status quo rather than expressing ourselves with abandon.

A nice infusion Sunidhi Chauhan’s vocals, which will fill the viewers with energy and renewed hope with her rendition of the song Just Go To Hell, Oh Dil. Alia translates the essence of the song appropriately on the screen as she dances, devoid of any restraint.

The background voice by sharukh khan, add depth to the further in this 4th teaser. What works for the trailer is Khan’s articulate voice, Bhatt’s nuanced acting that allows the viewers to peek into the deep emotional turmoil within her, the undeterred vocals of Chauhan and the simple yet catchy lyrics written by Kausar Munir. Amit Trivedi's music adds to the appeal.

The teaser ends with Khan quoting Albert Einstein in one of his life lessons to Bhatt.

This is the fourth teaser released by the makers Gauri Shinde, Karan Johar and R Balki. They had decided to release four 'takes' of the film, instead of a full fledged theatrical trailer, since Bhatt plays a budding filmmaker. The four 'takes' consist of four life lessons that Khan’s character explains to Bhatt’s character.