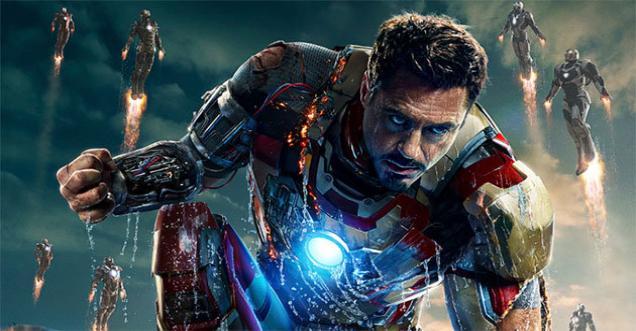 Movie Review: Like The Dark Knight Rises, for a major portion of the film, the Iron Man (Robert Downey Jr) stays unmasked.

His new armour flies piece-by-piece to his body. He stays mortal, as in most scenes, you see him wearing just one part of the armour.
Right in the beginning as Tony Stark declares he is a 'changed man', you fear the character might lose out on its core personality.
You wonder if Shane Black can pull it off, considering it's his first outing as an Iron Man director and it comes after the massive success of The Avengers.
But Black breathes new life into the franchise while retaining its trademark charm. He keeps the film vastly different from Jon Favreau's previous installments by adding his own brand of action-humour and twists.
Black combines spectacular action, comedy and drama to get you entertained and emotionally invested in his characters.

Scenes where Tony confesses his fears to Pepper ( Gwyneth Paltrow), his interaction with a small boy are heart-rending. Robert Downey Jr gets a multi-layered role and he performs with absolute finesse. His smirk and those classic wisecracks amuse you the most.
However, Ben Kingsley steals the show! He is bound to get major applause for his performance. Guy Pearce (Aldrich Killian) is effective as an actor but his motives seem unconvincing. His character fails to make the desired impact.
From the jaw-dropping attack on Stark's Malibu estate, his brand-new prehensile armour, to a mind-blowing airborne rescue scene, Iron Man 3 is every bit the superhero blockbuster you'd expect it to be. Just do not leave the theatre once the closing credits start rolling!
Note: You may not like the film if you find solo super-hero films tedious post 'The Avengers'!