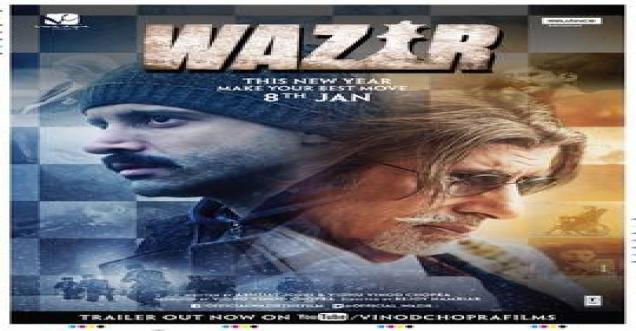 Year 2015 has been a good time for most of bollywood movies. We have seen back to back hit by non
other then salman khan in Bajrangi Bhaijaan And Prem ratan dhan payo and to hits like dilwale, Baby, Badlapur, Dum Laga Ke Haisha and many other hits.
It was a good year for bollywood in 2015.

Hope the year 2016 brings in the same charm for bollywood.
Year 2016 is going to be another year of great expectation for the bollywood with some major lineups by the big stars of bollywood.
This year we will be seeing the release from the three Khans of the bollywood all movies to be released in this year.   Wazir
This first major release of the start of 2016 thriller stars Amitabh Bachan, Farhan Akhtar and john Abraham in the lead pair. Is a Thriller based movie.   Watch the trailer below

The film tells the story of two unusual friends—a paralysed chess grandmaster and a grief stricken ATS officer—brought together by a peculiar twist of fate as part of a wider conspiracy that has cast a dark shadow over their lives, scheduled to be released on 8th jan 2016.   Ghayal Once Again Another hype goes to sunny deol, ghayal once again is the sequel to the hit movie Ghayal, which was it self acted by sunny deol.This film is to be released on 15th Jan 2016. Watch the trailer here.   Airlift Akshay Kumar starter is the next in line of jan 22, 2016 release, we can expect a another action packed movie from the fabulous actor. Watch the trailer now.   Fan Shah Rukh Khan in the lead role is set for april 15, 2016 release, the teaser of the movie has already created hype around. Wish another success for this fantastic actor. Watch trailer here on ayupp.   Jagga Jasoos Ranbir Kapoor starter is a another movie of the acclaimed director Anurag Basu is scheduled for the 3rd june 2016 release. The film features Ranbir Kapoor, Katrina Kaif, Adah Sharma and Govinda in lead roles, and tells the story of a teenage detective in search of his missing father. Trailer coming soon for jagga jasoos.   Raees Next again we have King Shah Rukh Khan back in this crime thriller on the EID release. Raees is set in 1980s Gujarat, it shows the story of a cruel and clever bootlegger (Shah Rukh Khan) whose business is highly challenged and eventually thwarted by a tough cop Ghulam Patel.
Sultan All set to clash with Shah Rukh Khan, the salman khan starter will also be releasing on 8th july 2016. still awating for trailer release.   Mohenjo Daro Hrithik Roshan, Mohenjo Daro is an upcoming epic adventure-romance film directed by Ashutosh Gowariker, scheduled for 12th Aug release.   Shivaay Ajay Devgan, directed and acted by Ajay Devgn.   Dangal The year 2016 will be ending with one of the best actor of the film industry Amir khan.