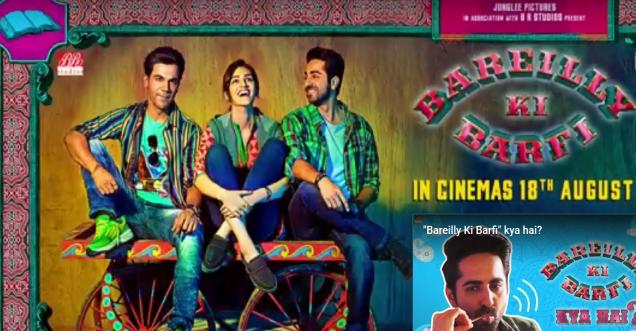 Movies: Bareilly ki Barfi trailer has been released on July 19, the trailer of the much-awaited film of Kriti Sanon, Ayushmann Khurrana and Rajkumar Rao. After launching the special trailer in Mumbai, Khurrana has released it on its Facebook account as well. This film is a romantic comedy. It has been directed by the Filmfare Award winner Ashwini Iyer Tiwari. The story is written by her husband Nitish Tiwari. This movie is based in Bareilly city of Uttar Pradesh. The story of the film is based on the French book 'Pyaar Ki Samagri'.

Nitish has compiled the story of the book with his co-writer Shreyas Jain as a script for the film. Its story has been set out from France and set in Uttar Pradesh's city Bareilly. The story that has been shown in the 2 minute 50-second trailer looks very interesting.  You will find the UP liners in the short trailer. Talking about the trailer, Khuranna said this story is of a girl Bitti who is looking for her perfect partner. She is looking for a boy who accept her as she is. After this, in Bitti's life, Chirag Dubey that is Ayesham Khurana's enters.

Dubey is the owner of a printing press. After him, as in our Bollywood movies, there is a third person's entry in the story. While Chirag is watching Bitti's love dreams, Bitti falls in love with Pritam Alvi, the author of Bareilly ki Barfi book, that is, Rajkumar Rao.  Enjoy the trailer below