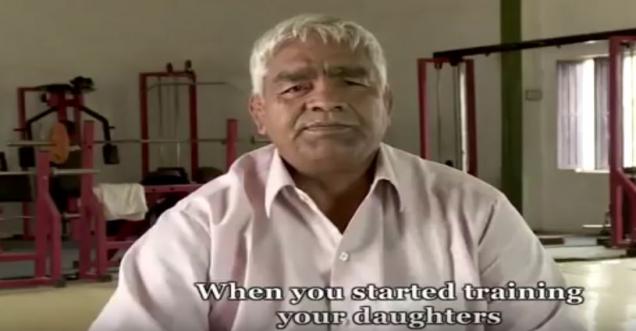 Dangal, Satyamev jayate: Aamir khan invited Phogat sisters on 8th November 2014 in his show Satyamev Jayate on Star plus. This was 6th and final episode of the season 3. The them was “When Masculinity Harms Men”. Both the Phogat sisters – (Geeta Phogat and Babita  Phogat) were invited to the show.

Original Dangal Hero: During this episode, Aamir Khan was discussing issues related to Manliness. The theme of his last episode was how women’s are treated in Man dominated society. He explained that almost 95% of cases of violence in India are committed by men. He covered almost all topics related to incidents of acid attacks, ragging or road rages. The idea was to explain, how women’s excel in the tough environment.

Phogat interview: Mr. Perfectionist started the show with describing the audience about the current situation of women’s in India. That, whenever a girl in born in North India, the main concern of parents is dowry and their marriage. And if a family has 4 daughters (Geeta, Babita, Ritu and Vinesh), then life becomes more miserable. But the case for Mahavir Phogat was different. His four daughters are his dreams.

Then he welcomes Geeta and Babita Phogat on the show with big applause from audience. They tell him that their childhood was different from other kids. In earlier stages of their learning, they had to run in village fields. They had to compete with male to prove they were stronger. They often got beatings from their father, Mahavir Phogat as well. But, all these things made them more stronger person. Senior Phogat was their inspiration which lead them to win Gold medal in Common wealth games. Geeta won gold (55kg category) in 2010 Common wealth games held in Delhi. While Babita won gold (55kg category) in Commonwealth games held in 2014 in Glasgow.

Aamir showed the video of commonwealth games in the show. Audience also got a glimpse of Mahavir Phogat through video conference. The great man was seen in the gym and speaking for the show Satyamev Jayate.

We can conclude that Mr Perfectionist, Aamir khan, must have got inspiration from this show to make a movie on this topic. Dangal got released on 23rd December. If you have not seen the movie, you can get a glimpse of it by watching it below. Njoy!!!

When and where actually the movie DANGAL comes in aamir khan's mind? See the video for more