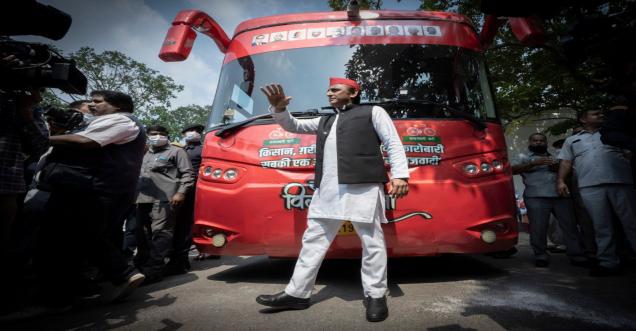 Uttar Pradesh: While addressing a public meeting in Saharanpur on Sunday, The Uttar Pradesh, Samajwadi Party President Akhilesh Yadav claimed that his government is going to be formed in the next four to five months.

He accused the Bharatiya Janata Party of being anti-farmer and labourer. Akhilesh said that inflation and unemployment are at their peak during the BJP rule. Apart from this, he made a number of promises, Change will come from UP itself, and 2022 election is not small. People have now made up their minds to change the BJP government.

He said that there was a time when it used to take more than eight hours to reach Lucknow from Ghazipur or Ballia. But after five months, as his government will be formed, he will first break the coconut for this road, so that the people here reach Lucknow in four hours.

Priyanka Gandhi Lakhimpur Kheri, the Whole government was trying to save the minister's son

Akhilesh asked the public, "So tell me those who are sitting on the throne, now we have seen their deeds. We saw the work of his people in Lakhimpur Kheri. Where the farmers were crushed by the car. Was crushed by the tires of the car. The farmers have been crushed, but along with that, they are ready to crush the law as well. For those who can crush the law, it will not take long for them to crush the constitution. Farmers are being called Mawali. If their bus goes, then call them terrorists. No matter how much BJP has humiliated the farmers, but they are firm, they will not move until the three laws are not returned.

He further said that during our tenure the work of construction of a hospital was started in Saharanpur, it is still half incomplete. Therefore, even if we have to give more budgets, then we will ensure its construction. So that poor people can get better health facilities. This election is the choice of the country and your future. If their government is formed again, they will continue to crush them. Had they not been given a chance again in 2019, the incident of Lakhimpur Kheri would not have happened today. These people are now preparing to crush the constitution. People of the Bharatiya Janata Party can do anything to win elections, so be careful.

Akhilesh Yadav said, "Once a pandit ji met us in an aeroplane. I had said the same thing in the press conference in Lucknow. He saw my hand and was delighted. Pandit Ji said this time AAP's government is going to be formed, SP will win 350 seats. I made a humble request to Pandit ji and said that I have blessed 350 seats, but add one from our side. You make 351." Let us tell you that Akhilesh Yadav keeps on referring to the prediction of this Pandit ji.

How can Ganga flow in reverse from Bihar to UP?

Targeting CM Yogi, Akhilesh Yadav said that during the Corona period, the BJP government left the people on their own. People kept making rounds of hospitals, but they did not even get the right arrangements. People kept losing their families. Not only this, when people were dying due to Corona, their government did not even allow the dead bodies to be cremated. Later the dead bodies of people were found floating in the Ganges. Even on this, he lied. The BJP government said that this dead body has come from the neighbouring state. I do not understand when the Ganga started flowing from Bihar to UP. Is Ganga also now flowing in the opposite direction? These people had come to power by promising to clean the Ganga and now they have started destroying the Ganga itself. It has been the history of UP that those whom they bring to power, also hide them later.

SP President told the public, "This is democracy. People know how to sit on the throne, they also know how to take them down. These are the name changes. If someone goes to meet the Chief Minister, it is not necessary that he should have the same name when he returns. You want to change the history by changing the name, just now you guys looked at the side, didn't you see? Wanted to erase history by changing the name, but tell them that this is the land of heroes. These are the same people whose ancestors worked to shake the British in 1857. Who will forget Kotwal Dhan Singh Gurjar, who worked to shake the British in 1857.

Akhilesh Yadav said, "The name will change, the history will change, if elections come, their government will change. First aeroplanes were sold; airports were sold; now trains are also being sold. Later the stations will also be sold. Watch BJP's game. One by one they are selling everything to private companies. Maybe say one day we will not run the government, it will run by outsourcing.