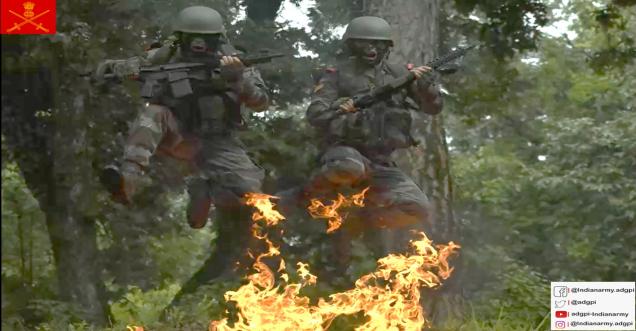 Image for representational purpose only

Kashmir Encounter, Jammu: Five Army personnel have been martyred in the Surankot encounter in the Poonch district of the Jammu division. The encounter between the terrorists and the security forces is still going on. Four to five terrorists are surrounded. The army received inputs late on Sunday night that terrorists are present in Surankot. Army contingent cordoned off the area and started search operation. But the weather became a hindrance. After which the security forces started the operation again in the early hours.

5 soldiers including an army officer have been martyred in an encounter with terrorists in the Rajouri sector of Jammu and Kashmir. According to the information, the counter-terrorist operation was going on in the Pir Panjal range. During this, the terrorists started firing on the army party. In this, a Junior Commissioned Officer (JCO) and 4 jawans were martyred. At the same time, 3 to 4 jawans have been injured, who are being shifted to Army Hospital. The operation is still on and a backup party has been dispatched to the spot.

A couple in love commits suicide in Rajasthan

One JCO & 4 jawans of Indian Army sustained critical injuries during the anti-terror operation in Poonch, J&K today. They were rushed to the nearest medical facility where they succumbed to injuries: Defence PRO, Jammu https://t.co/FKjto71CZ7

Army officials said that on information about the presence of terrorists in the area, the security forces started the operation in the early hours of Monday. Information was received about the presence of heavily armed terrorists in this area. When the search operation of the army was going on, only then the terrorists opened fire. 5 jawans including JCO were seriously injured due to bullet injuries, who later succumbed to their injuries.

Based on intelligence inputs, Indian Army launched a cordon & search operation in villages close to DKG in Surankote jurisdiction of Poonch district of J&K today morning. The encounter with terrorists is going on: Defence PRO, Jammu

Two terrorists were killed in Anantnag and Bandipora

In Bandipora, Jammu and Kashmir, security forces killed a terrorist in an encounter. The slain terrorist has been identified as Imtiyaz Ahmed Dar. He was associated with the terrorist organization Lashkar-e-Taiba. Kashmir IGP Vijay Kumar said Dar was involved in the recent civilian killings at Shahgund in Bandipora.

One terrorist was killed in Anantnag, one jawan was also injured while in Anantnag also there has been an encounter between security personnel and terrorists. In this, the security forces have killed a terrorist. During this, a policeman was injured. Kashmir Zone Police said that the operation was going on till noon. Two terrorists are reported to be hiding here.

Capt. Amarinder Singh tweeted, Our worst fears are coming true. With Pakistan backed Taliban taking over Afghanistan, terrorism is increasing in Kashmir. Minorities are being selectively targeted & now five soldiers have been killed in action in the Surankote sector. We need to deal with it decisively and firmly.

Our worst fears are coming true. With Pakistan backed Taliban taking over Afganistan, terrorism is increasing in Kashmir. Minorities are being selectively targeted & now five soldiers have been killed in action in Surankote sector. We need to deal with it decisively and firmly. https://t.co/mWojSeLZHB