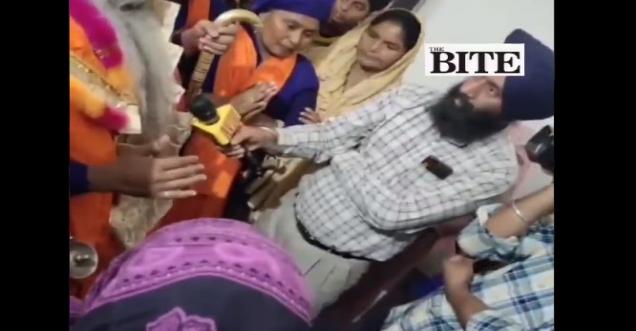 We have seen a normal gathering of leaders when a Dalit person dies in a country like India, however, It is to inform the users, till now no political party has come to the house of Dalit Lakhbir Singh.

But, before his arrest, he was also respected among the Sikh community in Amritsar. Baba Narayan Singh, who is going to surrender at Sri Akal Takht Sahib, is a member of Tarna Dal Nihang Jathebandi. Coil Sonepat district police station has been informed that access to it is. A garland of notes was also garlanded to honour him at a prominent Sikh shrine in Amritsar.

BIG : Jatthedar Narayan Singh was given a grand Hero style felicitations at Farmer's Protest Site before he surrendered for the brutal murder of Lakhbir Singh

The Lakhbir Singh's post-mortem report also showed that 37 marks scarred the different weapons on their bodies were found. Apart from sticks and sticks, he was attacked many times with many sharp weapons. He died due to excessive bleeding. Police have been deployed to conduct the last rites of Lakhbir Singh peacefully in his village. The 'United Kisan Morcha' is running away from this incident.

The accused Narayan Singh was honoured at the camp of Nihangs. The victim's family has demanded a high-level inquiry into the matter. The family of agricultural labourers says that God-fearing Lakhbir Singh cannot even think about the sacrilege of the religious text. Cheema lives in Kalan village with his wife 12, 11 and 8-year-old daughters. By working in the fields and the market, he used to jugaad two times' bread.

India Today has claimed in its latest report that the United Kisan Morcha allegedly complained to the Haryana and Delhi Police on several occasions about the presence of this 'armed group' at the protest site. Seeking to strike a balance, the SKM in a statement also said that the Morcha is against sacrilege of any religious text or symbol.

The SKM had alerted the police of #Haryana and #Delhi about Nihangs on many occasions, said sources in the Morcha.
(@iMohit_Sharma)https://t.co/YpU1FAzkAE

Attempt being made to make morcha into a religious issue... seemingly a conspiracy, it should be probed...: Jagjit Singh Dallewal, Samyukt Kisan Morcha pic.twitter.com/JcrEyyRDrR