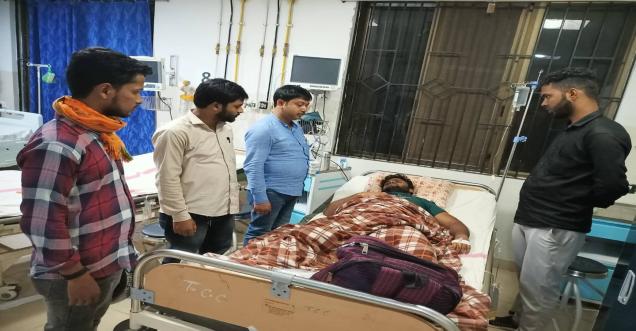 Apart from this, another case also came to light where ABVP worker Shibaji Sengupta was attacked by the people of NSUI and Trinamool Chhatra Parishad. The ABVP worker suffered a lot in this incident but now the condition is stable. According to reports, several appeals were made to restore peace in the area, but after Friday prayers in around 1100 mosques in Tripura, members of the community were provoked and then the situation in the area worsened.
UP is the first state in the country to apply 13 crore doses of vaccine

The administration has imposed Section 144 in the area to control the situation. Now gathering of 5 people at one place is prohibited. The ban will remain in force till October 31. Unakoti police said, “Section 144 has been imposed in Laxmipur and Kailashahar for disturbing the peace in two separate incidents. Yesterday, unidentified miscreants ransacked the Kali temple in Laxmipur, and the ABVP leader was attacked by activists of NSUI and Trinamool Chhatra Parishad in Kailashahar."

On the other hand, it has been confirmed from the official handle of ABVP Tripura that Shibaji Sengupta is the secretary of the organization in Kailashahar Nagar Unit. After the attack on him, he has been treated at AGMC & GBP Hospital.

Indian Express journalist Samriddhi K Sakuniya has shared the video of an ABVP worker. It can be seen that Shibaji is lying on a stretcher in it and is being taken for medical treatment.

Regarding the attack on the temple and the worker, Samriddhi claimed that earlier a madrasa ulema named Afroz Ali was attacked by some unidentified people. At the same time, the shop of Akbar Ali was burnt, after which the incident of attack on the Kali temple was carried out.

Update 🚨 #Tripura
After the incident one madrasa teacher, Afroz Ali was attacked by some unidentified people in Kailashahar Town and a shop in Paiturbazar, Kailashahar was also burnt. Don't have the visual of shop being burnt, as soon as I get it, I will upload. pic.twitter.com/dB7EyNQdfb

Let us inform you that communal unrest was seen in Dharmanagar of North Tripura after mutual clashes. The Vishwa Hindu Parishad (VHP) took out a march there demanding the protection of minority Hindus in Bangladesh. The march was led by VHP leader Purna Chandra Mandal. According to some media reports, violence broke out when the procession reached Rowa village in Dharmanagar. The situation had worsened after the stone-pelting there. Some reports had said that the protesters targeted a mosque and then damaged their properties.