Actor Irrfan Khan is hospitalized once again. The actor has reportedly been admitted to Kokilaben Dhirubhai Ambani Hospital in Mumbai 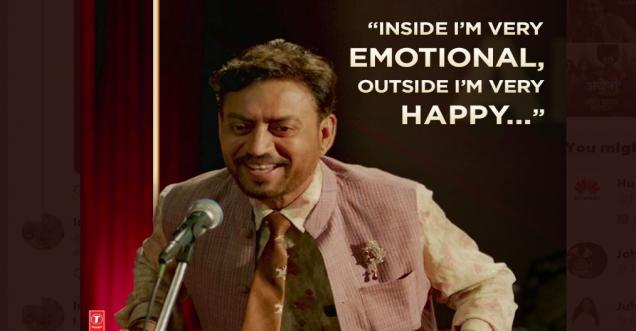 Mumbai: After a brief hospitalization the Actor Irfan Khan, loved by most of the Indians, died at the hospital. He was 54 and is survived by wife Sutapa Sutapa Sikdar and two sons.

Actor Irrfan Khan was hospitalized last night. The actor was reportedly been admitted to Kokilaben Dhirubhai Ambani Hospital in Mumbai amidst the ongoing lockdown. Irrfan Khan's sudden health deteriorated on Tuesday, after which he was taken to the hospital. According to media reports, the 53-year-old actor has been admitted to the ICU of the hospital, where he is accompanied by his wife Sutapa Sikdar and two sons.

A native of Rajasthan, Irrfan studied at the National School of Drama. He came to Mumbai in the 80s and started with TV shows like Chanakya, Banegi Apni Baat, Bharat Ek Khoj, and Chandrakanta.

Just to update the actor was diagnosed with Neuroendocrine tumor some time ago, he has been ill since then and for that, he has been kept under medical supervision. He underwent treatment in London for almost a year.

Irfan is mother died recently. The actor's mother Saeeda Begum breathed her last on Saturday in Jaipur, where she lived. However, due to the ongoing lockdown, the actor could not physically attend his mother's funeral. He allegedly cremated the mother through video conferencing.

I support this because I believe we need to change from the roots#gramsevasangha #oneworld pic.twitter.com/ecgY9v4wud

Earlier this year, Irrfan kept away from the promotions of Angrezi Medium, the latest film of Khan that released in March, due to his health. The release of Angrezi Medium was also affected due to the novel coronavirus outbreak. Angrezi Medium later had an online premiere, on Disney+Hotstar. In fact, Irrfan was under treatment while they were shooting for the film in the UK.