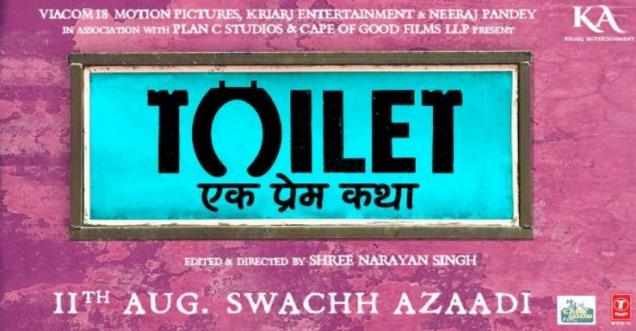 Movie Trailer: After many teaser posters finally the much awaited trailer of movie Toilet-Ek Prem Katha has been released. Akshay Kumar himself posted the trailer on his Twitter and facebook handle.

Watch the latest trailer of the movie Toilet Ek Prem Katha below Youtube, twitter and facebook links. It's time to be a part of Keshav and Jaya's anokhi love story! Presenting the trailer of Toilet- Ek Prem Katha.

The trailer was shown in the post the batting after South Africa, In the India South Africa match in Champions trophy 2017 and immediately it was posted on Akshay Kumar’s twitter account.

The trailer is so beautifully presented that you will really start making the plans to watch the movie soon asit releases on Aug 11, 2017.

Toilet - Ek Prem Katha traces the love story between a simple man Keshav (Akshay Kumar) and progressive Jaya (Bhumi Pednekar), set in two villages near Mathura. Toilet - Ek Prem Katha is a satirical take on a battle against the age old tradition of open defecation in the country. From the panchayat to the sanitation department, from the role of the government to the superstitions of the villagers, from scams to the ethos, from first love to a matured romance.

Earlier Akshay Kumar has posted to launch the trailer of Toilet Ek Prem Katha in the mid-innings show on Star Sports India today or to get it personally was posted by Akshay Kumar today.

Akshay has been busy promoting his film for quite some time. A few days ago, Akshay Kumar also met Prime Minister Narendra Modi, where he had conveyed about this film.

After meeting the Prime Minister, Akshay also shared his information on his Twitter account and posted a photograph with Prime Minister Narendra Modi.