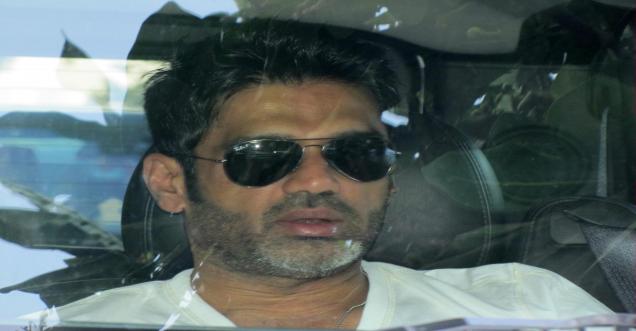 Mumbai: Eight people, including superstar Shah Rukh Khan's son Aryan Khan, were detained after the Narcotics Control Bureau (NCB) raided a cruise ship off the Mumbai coast on Saturday night in connection with the alleged seizure of drugs. On this arrest, Bollywood star Suniel Shetty has now come out in defence of Shahrukh Khan's son Aryan Khan.

NCB has not arrested Aryan Khan, the son of Shah Rukh Khan.

WHAT DID SUNIEL SHETTY SAY?

Suniel Shetty in his statement said, "When a place is raided, many people are taken into custody. We believe that a particular boy may have consumed it (drugs), and probed The process is still on."

In his statement, Suniel Shetty said, "It is not right to assume that Aryan may have taken drugs without completing the investigation. Aryan is still a child."

Suniel Shetty in his statement said, "When a place is raided, many people are taken into custody. We believe that a particular boy may have consumed it (drugs), and probed the process is still on."

#WATCH | When a raid is conducted at a place, many people are taken into custody. We assume that a particular boy must have consumed it (drugs). The process is on. Let's give that child a breather. Let real reports come out: Actor Sunil Shetty on NCB raid at an alleged rave party pic.twitter.com/qYaYSsxkyi

In his statement, Suniel Shetty said, "It is not right to assume that Aryan may have taken drugs without completing the investigation. Aryan is still a child."

SHAME ON YOU SUNIL SETTY
YOU LOST YOUR DIGNITY AND RESPECT IN WHOLE WORLD https://t.co/jstC2twYbS

Suniel Shetty also said that Bollywood is being targeted in such cases and it is not right to accuse anyone without an investigation report.

According to the information, this cruise was going to roam inside the sea for two days. It was a 2 day trip from Mumbai to Goa. More than 1500 people were invited for this. His booking was done online. An amount ranging from 80 thousand to 1 lakh rupees was taken from them. Many musicians were also going to perform in it. For this reason, this party was called a music event. A Delhi-based event company named Namascray experience had organized the party and the name of the party was being told as CRAY ARK. The name of the ship on which the rave party was taking place is being told as Cordelia Cruise.

Most of the people who booked in the name of the music program in this cruise were from outside states. Most of these people did not even get boarding passes. People say that they have been created. Those who came out say that they had no idea that something like a rave or a drug party was happening inside. They were just told a music event.

The NCB team also seized a huge amount of drugs being used in the rave party on the cruise. The interrogation of the accused is going on in the NCB office. NCB will produce the accused in court tomorrow.

On receiving a tip-off about a party being on the ship, the NCB team conducted a raid. Prohibited narcotics were recovered from some of the passengers, the official said. The matter is under investigation.

According to ANI, at least 10 people have been detained during a raid at a party organized on a cruise in Mumbai.

According to NCB sources, the drugs that have been recovered from the cruise ship include drugs like heroin, MD, hashish and cocaine. NCB has found leads of 18 drug peddlers who are suspected of supplying drugs to the rave party of this cruise. After tightening the noose on the accused who took drugs from the party, now NCB is looking for these drug peddlers.