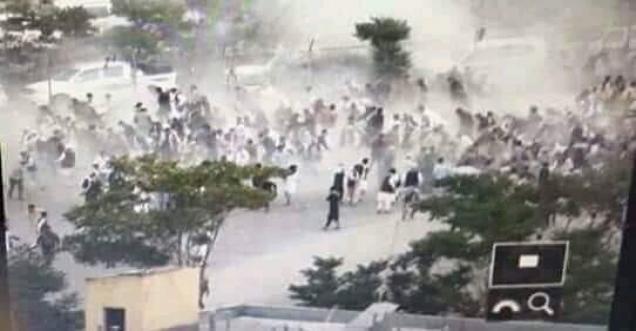 Afghanistan, Kabul:  A bomb exploded at the entrance of a mosque in the Afghanistan capital which led t to the death of several civilians. The blast targeted the entrance of a mosque in the Afghan capital Kabul on Sunday. A Taliban spokesman gave this information. The blast targeted the Idgah mosque in Kabul, where prayer was being held in memory of the mother of Taliban spokesman Zabiullah Mujahid. No one has immediately claimed responsibility for the attack.

So far no terrorist organization has taken responsibility

#BREAKING: An explosion was reported in Eidgah mosque at the centre of Kabul. Taliban spokesperson says there are casualties.

Continuous blasts in Kabul after the coming of Taliban rule

However, since the beginning of Taliban rule in Afghanistan, this organization Islamic State-Khorasan (IS-K) has been continuously targeting Kabul and surrounding areas. It is believed that the ISIS-K Attacks (ISIS-K Attacks) i.e. Islamic State-Khorasan has exploded outside the mosque of Kabul. It is the Afghanistan branch of the global terrorist organization Islamic State. ISIS is considered a staunch enemy of the Taliban, which is constantly carrying out attacks against the Taliban.

“The bomb targeted the Eidgah Mosque in Kabul where a memorial service was being held for the mother of Taliban spokesman Zabihullah Mujahid.” https://t.co/BREEP8MfUZ

However, attacks by the Islamic State terror group have increased since the Taliban took over Afghanistan in mid-August. In such a situation, the possibility of further deepening of the conflict between the two extremist groups has increased. IS dominates the eastern province of Nangarhar and considers the Taliban an enemy. It has claimed several attacks against him, including several murders in the provincial capital Jalalabad.