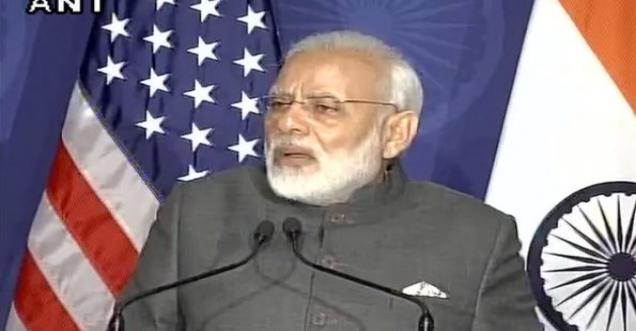 WASHINGTON: Prime Minister Narendra Modi today targeted Pakistan and said that the Surgical attack by India across the LoC proves that India will not hesitate to take stringent measures to protect itself. He also said that No country in the world has questioned these attacks.

While addressing Indian-Americans during a function in Virginia, Modi said that India has been successful in explaining the true face of terrorism to the world, which is destroying peace and normal life in the country. He said, when we talk of terrorism 20 years ago, many people in the world had said that it was a problem related to law and order and then they did not understand it. Now the terrorists made them understood the meaning of terrorism, so we do not need to explain to them now. Modi said that the surgical attacks showed that India, which generally follows the principle of restraint, can also protect its sovereignty if needed and can also ensure its security.

With the active strike we made the power feel
He told the NRIs, "When India made a Surgical Strike, the world realized our strength. The world saw that we used to exercise restraint but in the event of the need to deal with terrorism and protect ourselves, strength can also show. India had made Surgical Strike on terrorist bases across the Line of Control on September 29, 2016, 11 days after the Uri attack. 19 Indian soldiers were martyred in the Uri attack.

No country raises questions on India
The Prime Minister said that the world could have put India in the questions after the attack across the Line of Control, but for the first time, no country in the world, on such a big step of making a attack against terrorist camps on Pakistani soil, no one raise a single question. Modi said, tearing into Pakistan, yes, there is talk of those people, who are victims of surgical attacks. Listening to this, the audience sitting there started shouting.

Also Read: Press Statement: PM Modi during his visit to Portugal on June 24